What’s wrong with pink and blue?

“What’s wrong with pink and blue?” Let Toys Be Toys campaigners are often asked this question. Tricia Lowther looks at some of the issues around colour coding.

How can there be anything wrong with pink or blue, aren’t they just colours?

Yes they are, and they are also used as cultural signifiers; codes that mean ‘boy’ or ‘girl’, and are used to segregate children (and sometimes adults) into two distinct groups to be targeted in very different ways. Despite retailers moving away from explicit ‘girls’ and ‘boys’ signs in shops, while we still have pink aisles and blue aisles we still have toys segregated by gender.

Whenever the question of pink toys for girls hits the news, (often in a sensationalist, ‘let’s deliberately miss the point’ kind of way), a rash of articles will appear in defence of the colour.

It’s been suggested that feminists think dressing a girl in pink damages her, pink toys are harmful and that pink should be banned, but in reality no-one wants to ban pink and no-one wants to get rid of traditionally ‘feminine’ pursuits. No-one is frowning at little girls in tutus – let them play with whatever they want to.

Just let it be a true choice.

Why has pink, in particular, been singled out? The point is not colours, it’s culture. UK campaigns like Let Toys Be Toys and Pinkstinks arose because of a culture that pressures children to conform to ideas of gender norms that they may not fit and, often, are not in their best interests.

When ‘My pink handbag’ sits next to ‘My blue toolbox’ on a toy shelf, there’s no need for explicit ‘boy/girl’ labels for children to know who they are aimed at. It’s not a big leap to suggest that marketing to children is one of the ways in which gender inequality is impressed upon them, from a very young age. That their gender dictates the choices available to them is a lesson learned early, and hard to shake off.

“Colour coding toys to limit their appeal to both sexes nurtures limitation rather than possibility,” says Melissa Hines, Professor of Psychology at the University of Cambridge. Professor Hines’ experiments, in which monkeys appear to show gender-based toy preferences, are often cited by people who oppose our campaign as evidence to support gendered marketing. But Professor Hines agrees with us,  in her article for The Conversation:  ‘There’s no good reason to push pink toys on girls‘.

As neuroscientist Lise Eliot points out in a recent interview, despite the marketing suggestion that girls naturally gravitate towards pink, colour preferences are almost certainly learned; “There’s nothing hardwired in our brains that says pink is for girls and blue is for boys.”

And what does pink mean? When we look at toys, we see that pushchairs, dolls houses, beauty products, arts and crafts and domestic toys like vacuum cleaners and cookers are predominantly sold in shades of pink. Clothes aimed at girls are typically adorned with pink hearts, flowers or cute animals in tiaras. 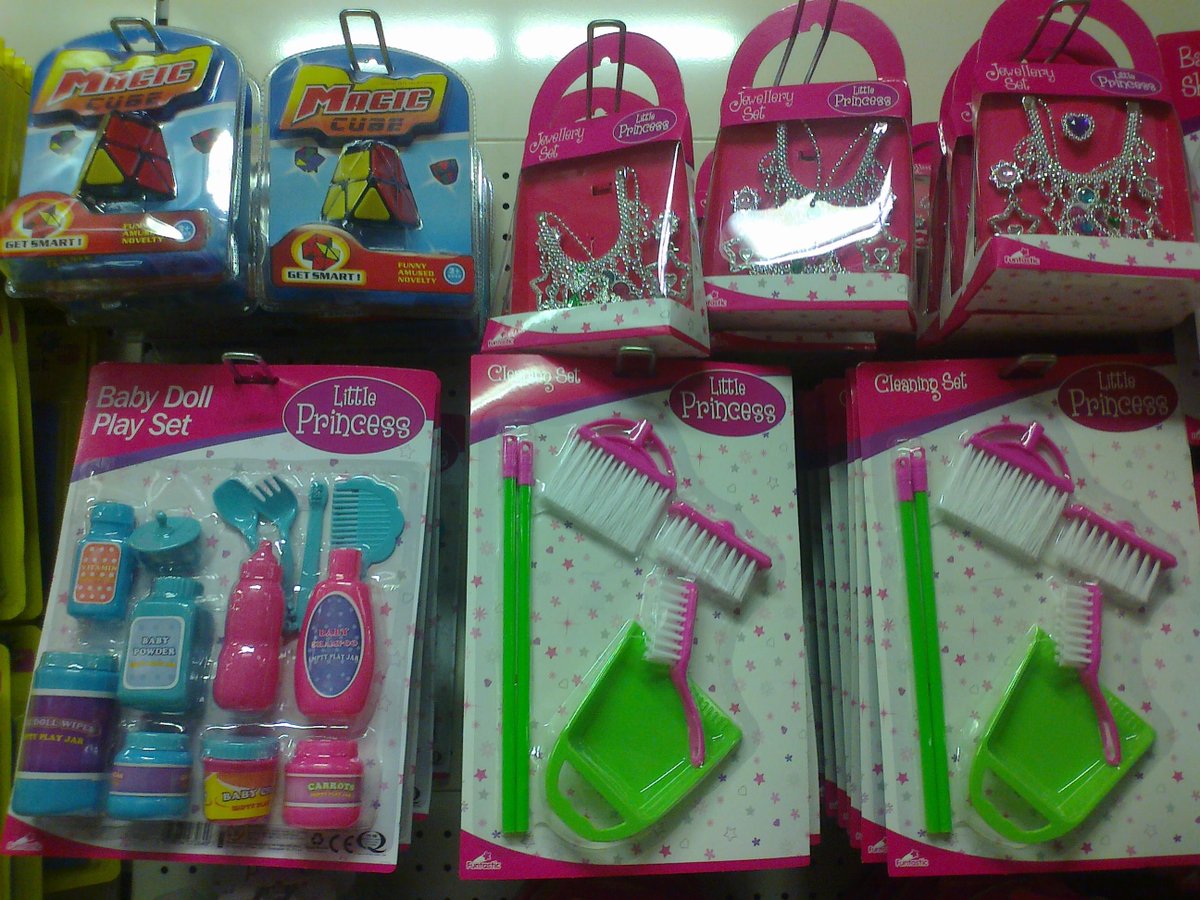 Caring, cleaning and preening – all wrapped up in a pink princess package.

Pink marketing tells us that being a girl equals being pretty, soft and sexy. Girls learn that what is expected from them is to look good and to take care – of baby dolls, fluffy pets and housework.

There isn’t anything wrong with cute bunnies, or pink flowers, (though there is an issue with the overwhelming preoccupation with appearance), but there is a problem when our culture says that this is the only way to be a girl, that it’s exclusively for girls, and by implication, that it’s something for boys to avoid.

When we discourage children from doing something it’s usually because it’s seen as bad or wrong in some way, so when boys are steered away from pink they learn that anything seen as for girls is to be scorned – not just the colour, but activities and qualities which, thanks to marketing, are now connected with that colour.

It will take a huge shift in mainstream attitudes before boys who like pink will be able to do so without fear of bullying.

If they want to avoid ridicule most boys learn to steer clear of pink. This means that they steer clear of toys that only a few years ago had a more universal appeal. An Argos catalogue page from 1976 juxtaposed with the same types of toys sold by Argos today illustrates how over the last few decades certain toys have become ‘pinkwashed’. The toys from the seventies come in a range of colours, and the girls on the page are dressed colourfully too, but the recent images show the fashion for pinkification.

Besides the fact that this is boring and unrealistic, it clearly shows that domestic toys like hoovers, cookers and pushchairs are aimed even more squarely at girls today than they used to be, because pink toys are less likely to be played with by boys.

At around about the same time that the Let Toys Be Toys campaign started in the UK, US teenager McKenna Pope spotted that Hasbro’s Easy Bake Oven was marketed specifically at girls. McKenna launched a petition that asked them to make a version in a colour her brother could play with. The petition gained huge support as everyone agreed that boys should be able to play at being cooks. A few weeks and over 45,000 signatures later Hasbro agreed to market an oven in silver and black.

Everyone applauded, but making a silver-black oven was, in one way, a step backwards, because a look at the history of Easy Bake shows that in previous years they had been available in a range of colours. ‘Progress’ is not always linear.

“The first three versions of the famous Easy-Bake oven” by Bradross63 – Own work. Licensed under CC BY-SA 4.0 via Commons

A colour loaded with meaning

What went relatively unquestioned in all of this was why playing with a pink toy is so untenable for a boy. It was exactly the same toy, only the colour made it so off-limits that tens of thousands of people signed a petition to change a colour. No other colour has that stigma, a stigma that says ‘girly’ is inferior.

Imagine if all colours had such strong associations; “No you can’t paint the living room green, green is for gardeners”, “If you wear orange people will think you’re religious”, “Yellow is only for tall people”. Ridiculous? And yet we’ve managed to create a stigma against boys wearing a shade of red.

There may be more products on the market than ever before but gender-targeted marketing means real choice has narrowed. If a toy, previously seen as universal, adds a new pink range specifically for girls it tells children all the others are for boys. A flirty name, such as ‘Heartbreaker’ or ‘Pink Crush’, (the names of ‘blaster toys’ aimed at girls by Nerf), completes the stereotype and effectively narrows the choice to ‘normal’ or ‘girls’.

Who needs the pink and blue boxes?

To campaign against the pink and blue divide is to campaign against limitation. It’s not an attack on girls who like pink or on boys who like cars, it’s just a suggestion that children don’t have to be told that those are the things they should like. Why should children, who don’t fit into what is considered to be a typical mould, be pushed into conforming to it? Let them be accepted for who they are.

Why not raise children to think that all options are open to them? That they can like pink or blue or yellow, that they do not have to conform to all the things society tells them a girl or boy should be, (and if they do enjoy those things traditionally assigned to their gender that’s fine), that people are individuals and that gender does not equal interests?

I don’t hate pink or think ‘girly’ is bad but I do hate it when pink and pretty is presented as the only way to be a girl, and I hate it when I see boys mocked for liking ‘girly’ things. I think it’s sad when my daughter’s friends describe themselves as tomboys because they like things seen as ‘for boys’ and the fact that this seems to mean they feel they should hate pink too.

Children live in a media-saturated environment and the pressure to conform is immense. At a time when children look for the rules of society that they are learning how to fit into, they are being taught an ever more polarized and exaggerated version of what it means to be a boy or a girl.

Pink is an easy marker that tells them where to stand in the great gender divide that is being sold to them by monolithic profit driven corporations who see only the money to be made by selling two versions of the same toy, a pink and a blue, and not the repercussions of what we are doing as a society when we push children towards strict ideas about gender identity. And if I’m sad for the girls who feel they need to reject pink to be allowed an interest in other things, I’m even sadder for the girls who start to think that if it isn’t pink, it isn’t for them.

Time to reclaim the rainbow

Pink and blue are just two of many colours. Let children have the whole spectrum from which to choose, give them the chance to find out where their interests truly lie and the opportunity to experience the world in every vibrant hue and shade.

This site uses Akismet to reduce spam. Learn how your comment data is processed.